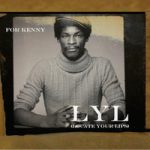 When I first traced five key bands of the Milwaukee scene from the late ’70s and early ’80s, one act remained a tantalizing enigma: Locate Your Lips.

Locate Your Lips’ drummer was the late Kenny Baldwin, founder of the Milwaukee alternative club The Starship, who passed away in September 2015. (Before his death, Baldwin was interviewed for the forthcoming epic Milwaukee music documentary Taking the City by Storm.)

A contemporary article in the Milwaukee Sentinel describes Locate Your Lips’ sound as “somewhere between the rock of the mid-1960s British Invasion and that of the recent new wave explosion.”

Beyond that fleeting mention, there has been precious little information available to me about LYL — and no public audio record of the band.

Now that gap has been filled with For Kenny, a two-CD release digitally edited and mastered by Otto & the Elevators’ Gary Tanin and slated for release April 5 that includes a live performance recorded in May 1985 for broadcast on WQFM radio as well as 10 tracks recorded in November 1984. END_OF_DOCUMENT_TOKEN_TO_BE_REPLACED

Milwaukee is among the smallest cities I’ve covered so far on FiveBands, but the passion and creativity of its rock-‘n’-roll scene has long rivaled the biggest towns on the musical map.

Sites like Milwaukee Rock Posters and social media groups like Lest We Forget: Deceased Milwaukee Scene are magnets for local lore, and scene veterans have been tireless in their efforts to make their history known.

Case in point: Taking the City By Storm, an epic documentary of the Milwaukee underground. Currently slated for release in 2018, the film is directed by Doug LaValliere (one of Milwaukee’s accomplished LaValliere brothers and a co-founder of the Prosecutors with Kevn Kinney, later of Atlanta underground sensations Drivin’ N Cryin’).

The producers are Judy Simonds and Clancy Carroll of the Dominoes and Clancy Carroll Band. (Carroll is also co-author of a new and improved book, Brick Through the Window: An Oral History of Punk Rock, New Wave, and Noise in Milwaukee, 1964-1984. Buy it via the Boswell Book Company site!)

END_OF_DOCUMENT_TOKEN_TO_BE_REPLACED

Footnotes of fandom: I was the Violent Femmes’ first California follower. My family lived in Milwaukee for a couple years before we moved to San Diego in time for junior high. I kept friends there, though, and that’s how I ended up seeing the Femmes at Milwaukee’s Jazz Gallery in June 1981, just a few months after the band formed. On August 23, 1981, the Pretenders spotted the Femmes busking in front of the Oriental Theatre and invited them to open that night; the rest is college-radio history.

If you’re interested in Violent Femmes prehistory and the Milwaukee scene at the turn of the ’80s, here are five bands you should know about: END_OF_DOCUMENT_TOKEN_TO_BE_REPLACED